Summer is right around the bend, and with it, the season of a great American pastime: baseball. As the baseball season heats up, another organization is also settling in for a busy summer: the Bureau of Consumer Financial Protection. The bureau has a total of 12 requests for information (RFIs) with comment periods running from April through the middle of July, which is about as many home games as each Major League Baseball team plays per month. Clearly, regulatory attorneys will be hard pressed to choose between cheering on their local clubs and taking full advantage of this rare opportunity to put the bureau on a solid footing.

Since the bureau’s inception, we have argued that there has been a lack of transparency and unclear “rules of the road.” Now, we have the opportunity to set the record straight and hopefully create a clearly articulated set of rules for companies to abide by, instead of the bureau’s former leadership’s reliance on consent decrees, guidance and grey areas.

The bureau’s past actions draw comparisons on outrages in baseball when an umpire seemingly creates his own strike zone, or his own determination on what it means to be “safe” or “out” at base. As a native San Diegan, I have watched my precious Padres fall short season after season, but loses are especially frustrating when it is due to a bad call. Umpires are the judges and juries on the field, which is why it is critical they make the right calls and refrain from making their own rules.

Like rogue umpires, the previous leadership at the bureau at times took a subjective approach that did not clearly outline the rules of the road, leaving U.S. companies feeling a lot like a safe runner that was erroneously called out. These companies play by what are the perceived rules, but later come to find that the bureau had a different interpretation that was not formally adopted by rule or thoroughly explained otherwise.

As the Wall Street Journal recently highlighted, Navient spent years defending itself against an effort by the bureau even though it was never clear that they had acted inappropriately, nor was it evident that any borrowers were harmed. Another poignant example is the indirect auto settlements. Through leaked memos, we learned the bureau wanted to move the market to flat or reduced fees, but their approach to influence the market “pushed the envelope.”

So far, the bureau has sought input on civil investigative demands (CIDs), adjudication, the general enforcement process, and the supervisory process. Over the past seven years, financial institutions have been afraid the bureau might make accusations even when the companies though the law was clear, or establish an adversarial posture that the institution is “guilty until proven innocent.” Going forward, we ask the bureau to:

Whether in financial services or baseball, the rules should not be changed ex post facto, nor should there be an inherent adversarial relationship between the governed and the one governing. As Acting Director Mulvaney declared in a January op-ed, “the days of aggressively ‘pushing the envelope’ are over.” U.S. businesses welcome this new era. Now, if only the Umpire had a consistent struck zone at a Padres game.

.@USChamberCCMC EVP for Capital Markets @QuaadmanT testified before the Senate Banking Committee on the implementation of federal lending programs under the CARES Act. Watch the hearing for his full take: banking.senate.gov/hearings/imple… 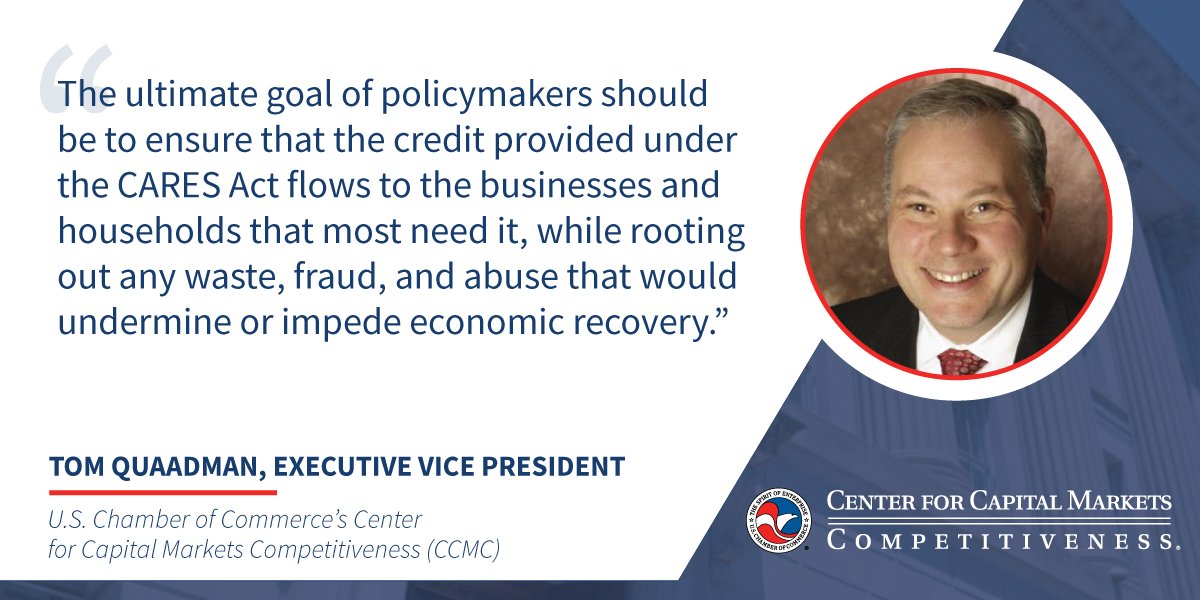