The Number of Small Business Loans is Down 41% Since 2008. Here’s How Congress Can Help.

Small businesses are the great engine of U.S. innovation, job creation, and economic growth. All engines need fuel, and for small businesses that fuel is capital. Small businesses depend on access to credit to get started, sustain operations, manage cash, make payroll, and create well-paying jobs.

Unfortunately, in response to the 2008 financial crisis, policymakers adopted a “one-size-fits-all” approach to bank regulation that has severely curtailed the ability of community and regional banks to serve the small businesses in their communities.

As a result, Main Street businesses are having trouble accessing the resources they need to get started and thrive. The most recent Federal Reserve survey of small business access to credit found serious financing shortfalls. The numbers are alarming: 60% of small business applicants received less than the amount for which they applied; 25% of applicants were unable to obtain any financing at all; and 25% of small businesses that did not apply for financing reported they were either too discouraged, or that the cost of credit was too high.

But some relief may be on the way. In the coming weeks the Senate is expected to vote on S. 2155, the Economic Growth, Regulatory Relief, and Consumer Protection Act. This bipartisan legislation is an important first step towards “right-sizing” regulation on community and regional banks, and will help reverse the decade-long decline in small business lending. By tailoring regulations for community and regional banks, S. 2155 will protect financial stability while ensuring these banks can serve the small businesses in their communities.

This bill doesn’t solve all of these problems, but it is a giant leap in the right direction.

According to the most recent data from the Federal Deposit Insurance Corporation, the total dollar-volume of small business loans outstanding across all FDIC-insured institutions is down 13% since 2008. Federal banking regulators have reported that the number of small business loan originations (i.e., the actual number of loans) is down 41.4% since 2008. To put the severity of these declines in context, the U.S. economy has grown almost 25% over the same period.

The steeper decline in originations compared to the dollar-volume outstanding may explain why some policymakers have fallen for the “overall lending is strong” canard: banks are being driven away from making smaller loans in favor of larger loans. The Center for Capital Markets Competitiveness (CCMC) released a new whiteboard video to help explain the underlining dynamics of this trend. Briefly summarized:

To be sure, there are some positive signs. Optimism among U.S. small businesses is at record levels, largely driven by improved economic conditions and the historic tax reform package. But optimism is ultimately a reflection of a potential future. To translate that potential into reality we need to provide small businesses with the right tools, and few are more important than access to credit.

"The Chamber is supportive of a competitive marketplace for automotive insurance and affordable options for all consumers." Read @USChamberCCMC comments in response to @USTreasury RFI on accessibility and affordability of auto insurance tinyurl.com/2dv48rv9 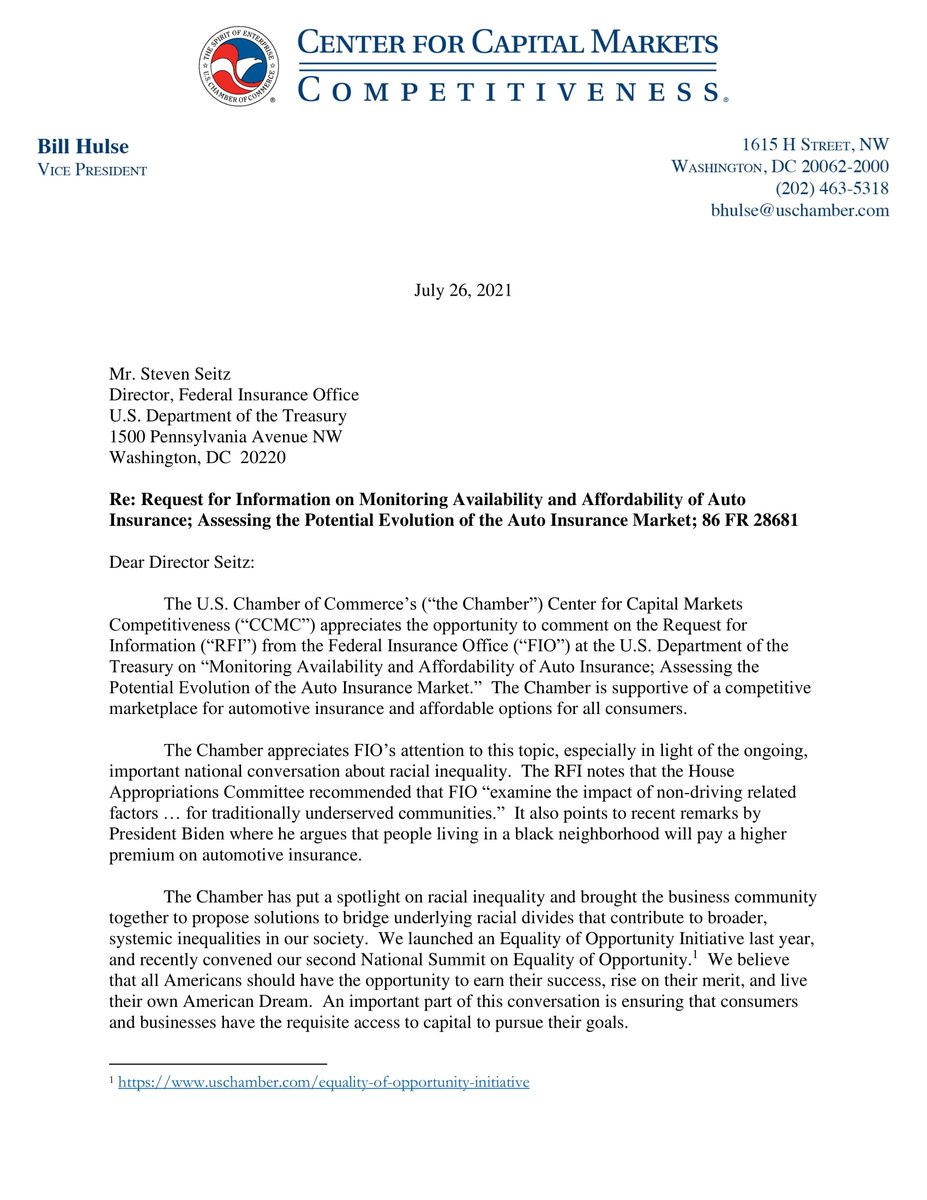